kegerator-guide.com
Your Guide To Draft Beer At Home!
Menu

Beer taps, also known as keg couplers, are what make the connection to the keg in your kegerator system. It allows CO2 to enter the keg and beer to go out to the faucet.

There's not much to buying a keg tap. They all function pretty much the same. You just have to buy the right type for the keg you want to dispense.

What are the six keg couplers?


So how do you know which keg coupler to use?

First off, almost all U.S. breweries use the D System - American Sanke. There are some exceptions but it's rare.

For all other beers check the list of beer taps above for some of the more common beer types for each. The list above gives the major beers but if you have any doubts, ask your local beer store. They should be able to tell you what coupler you need.

Now that you have your keg coupler...How do you use it?

How To Tap A Keg 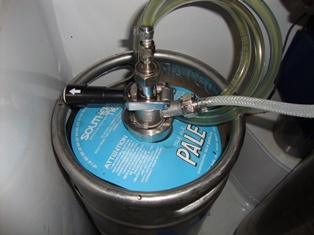 I almost forgot Step #5...Pour a beer and enjoy.

Have your say about what you just read! Leave me a comment in the box below.